On Thursday 21 Sept Kent CRP launched cycle rails at Yalding station together with members of the Rail Partnership, Southeastern and members of San Fairy Ann cycle club.  The event began at 10am with a ribbon cutting followed by a celebration at the local Tea Pot Island café. 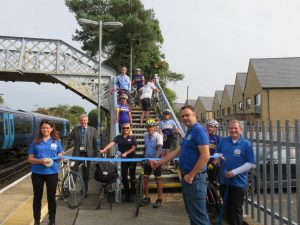 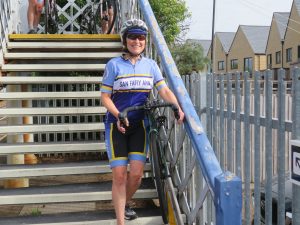 All other stations on the Medway Valley Line have a step free route to both platforms without the need to carry cycles over a railway bridge, only Wateringbury has not had rails fitted due to the bridge steps not being stable enough.

There are also long term plans to place cycle rails along the stations on the Kent Downs line (Ashford to Otford) where cyclists would otherwise need to carry their cycles over the platform bridges.

“We are so pleased that the hard work of the Community Rail Team led by Therese Hammond and Matt Fraser, Southeastern’s Community Rail Manager resulted in the implementation of a solution to help people make journeys by train and onwards by cycle over tricky station stairways. Railways are really cycle friendly and being able to take your cycle on trains at no extra cost provides a way to connect end to end journeys which is great for your health and the environment.”

“Cycle Rails allow cyclists to use trains as part of their ‘cycle, rail, cycle’ journey.  It’s difficult carrying a cycle over railway bridges at the best of times however, when commuting with laptops etc and the growing popularity of heavier e-bikes, the thought of carrying your cycle over a railway footbridge is off putting for many in our community. Thank you Southeastern for funding the cycle rails and helping the Partnership promote active travel.”